DENISON MEN’S HOCKEY: HOW THE TEAM COMPLETELY TURNED ITSELF AROUND

0-20, that was the record of Denison University’s Men’s Hockey in 2019 when they made the jump from Division III of the American Collegiate Hockey Association (ACHA) to ACHA Division II.

Then, COVID-19 prevented the ACHA from holding a season last year. Now, Denison has planted themselves on the map with a strong 9-3-0-1 record through 13 games this season.

As the 2021 season began, the Big Red didn’t know what to expect but were determined to be a better team than in 2019. It’s safe to say they have achieved just that.

Denison has won eight straight games and shows no signs of slowing down after dominant 4-0 and 11-5 wins over Butler University and Case Western Reserve University respectively this past weekend.

Denison’s turnaround is evident and puts them on many teams’ radar. The Big Red proudly stand at #5 in ACHA Division II with the 16th best record in the entire ACHA.

Coach Jeff German is proud of his team’s incredible turnaround and notes that a big difference between this season and their previous win-less one has been the leadership and overall change in team culture.

“The primary difference this year is our leadership core. Our Captains have really taken charge of the room. The whole team in general has a sedulous ethos. Everyone understands their role and their commitment to the team. It’s magical”

Denison’s 0-20 season still carries a lot of weight. For the juniors and seniors on the team who remember the rough introduction to Division II, the experience serves as fuel for them to push forward:

“Getting your head kicked in for 20 straight games two seasons ago has a way of tempering players who have an innate burning desire to compete and win. That beating we took in our first season in DII made the Captains (Juniors and Seniors) hardened and battle worthy. They don’t accept any effort from teammates that gives them indication of the team moving backwards. It’s written on our locker room wall ‘ALL GAS, NO BRAKES’” Coach German says.

Coach German also knows the team has made great strides forward in the past two seasons which have played a major factor in the team’s newfound success.

He notes “Top to bottom our team measures up with our opponents much better than previous seasons. Our depth has improved to the point where we are able to manage the game from the bench better than previous years. Due to COIVD-19 cancelling our 2020/21 season, if you combine Sophomores and First Year players, over 75% of our team had not played a college hockey game prior to this season. I feel like no one takes this for granted anymore. They come to play and practice with much more intensity than years past.”

As these games approach, Denison needs to ensure they continue working on their biggest weaknesses.

Coach German says “We are constantly improving. We have a motto on the team ‘We before Me.’ I see everyone playing selfless hockey and giving all they can for the good of the team. We need to clean up our defensive play and we are a little sloppy in the neutral zone, but overall we are trending in the right direction.”

Taking into account the large student body of DU’s future opponents compared to Denison’s relatively small one, it’s remarkable that the Big Red are competing so competitively against these schools, with some of them topping 50,000 students.

Coach German knows that these teams are strong and will make for tough competition but remains optimistic about Denison’s chances.

“We have some formidable opponents ahead of us this year… these games are going to be struggles, but we are equal to the task. It’s exciting hockey to be a part of.”

Catch Men’s Hockey back in action this Friday, October 29, against Indiana Tech at Lou and Gib Reese Ice Arena in Newark, Ohio. 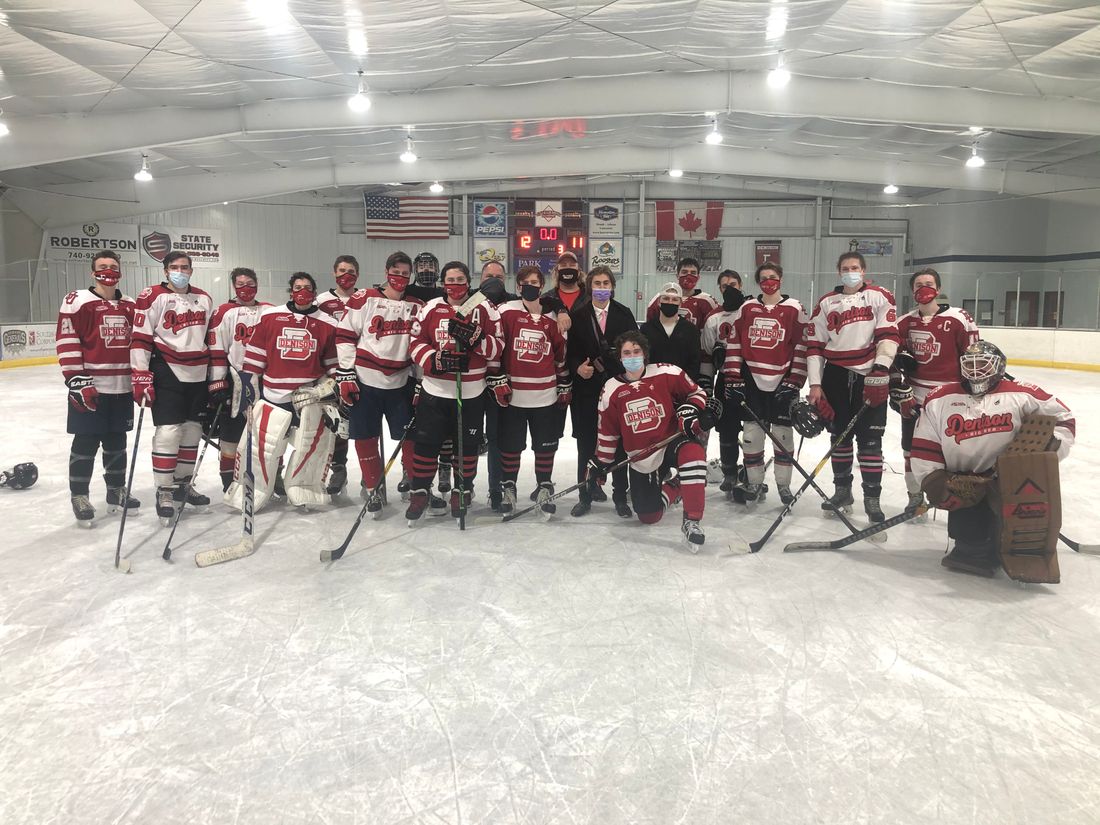 The end of a tough year for Denison Hockey. Covid shut us down but didn’t keep us down. We persevered. Three Seniors had their last college hockey game last night. Three really great boys that did much heavy lifting to keep our program moving forward these years. Unfortunately without much fanfare we’ll send them off this year without family to watch their last game or hand flowers to mothers who drove them to hockey practice for years. It hurts me I couldn’t do more. I had to petition to allow us to play this Red vs. White game just to let the boys pull their sweaters on one more time. You should have seen it! It was a fast paced and surprisingly physical tilt played with passion by both squads. Red won with a late goal in regulation, only :38 remaining, to seal victory 12-11 over the white team. Red will take the Covid Cup this year. I hate the overall feeling of writing off this year. You can’t write off these boys.

The seniors, (Captain) Nick Wert , (Assistant Captain)Colin Szanyi and (assistant Captain) Sean Hickey deserve to be honored for their contribution to this team and this program. Thanks boys. Way to stick it out and see this through. 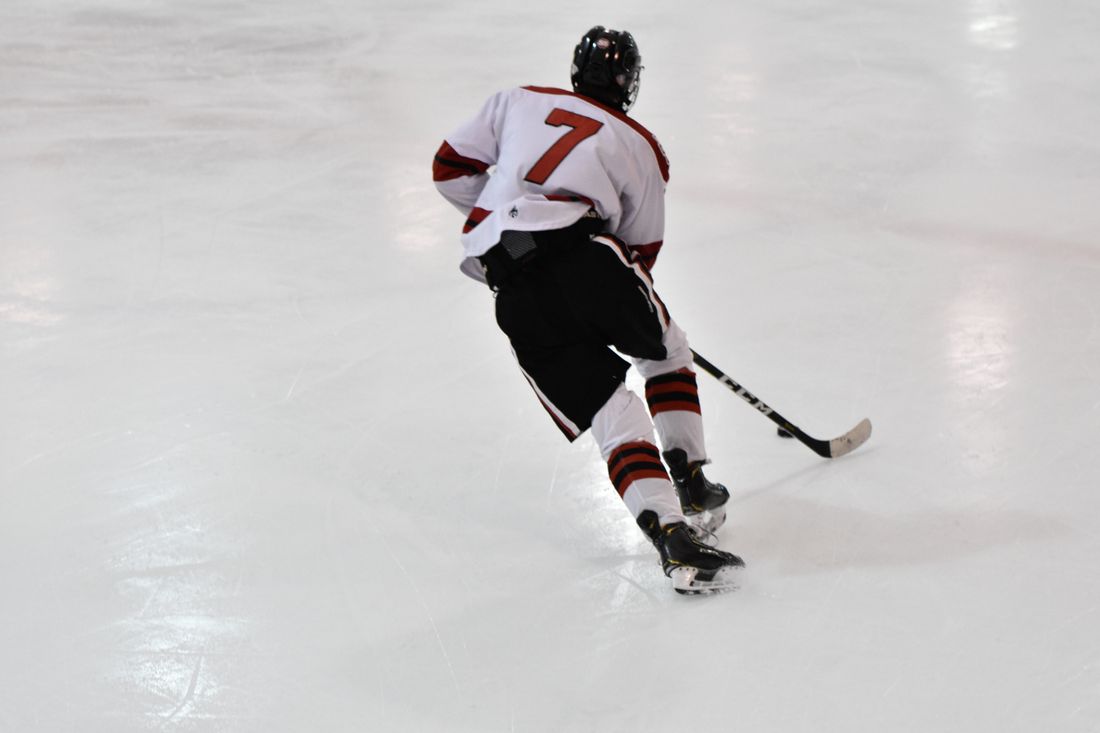 Staff Writer for The Denisonian

After a successful 2018-19 campaign that was highlighted by a regular season championship, the Denison Men’s Ice Hockey program will be making the jump from ACHA Division III to ACHA Division II for the 2019-20 season. With this change, Denison will now face tougher opponents than they ever have as a program, with the likes of Ohio State, Xavier University, the University of Kentucky, and Central Michigan University, to name a few. Coming off of such a triumphant season, Head Coach Jeff German and the team know what to expect facing these tougher opponents, but they know that they are heading in the right direction as a program. “We made great strides this year, picking up some great freshman while holding onto a core group of really good hockey players. Without question, we will miss the five seniors from last year. All in all, we expect to take a few lumps this year, but overall, it is a step in the right direction.”

It is safe to say that Denison Hockey has come a long way since its inaugural season in 1955.

Since becoming the Head Coach in 2014, Coach German’s objective from the start “was to establish Denison as a hockey school.” The jump from ACHA Division III to ACHA Division II to compete at a higher level will definitely help put Denison Hockey on the map.

Over Coach German’s five seasons coaching Denison Hockey, he has seen the program evolve greatly thanks to its great alumni, the athletic department, and the Denison administration. “Five years ago, the program was pretty lifeless. There was a core group of freshmen and a few upperclassmen that shared our vision. Now, after five seasons, the team’s trajectory is on a steep upward track. Mostly because we stay active in recruiting the best student athletes we can find. Also, the Denison Hockey alumni have really done a lot of the heavy lifting by staying deeply and personally committed to the team’s success,” German said.

He also spoke about how the team has gained the support of administration. “We have the attention of the athletic department, President Adam Weinberg and the ACHA; all helping to support our team and put Denison Hockey on the map. We still have a long way to go, but we are definitely taking all the correct steps to ensure success.” The future of Denison Hockey is looking as bright as ever before. Denison is quickly making themselves known as a program that should not be overlooked. The jump from ACHA Division III to ACHA Division to is “the single most important move we could have made for our program,” said Coach German. “While we will inevitably have some doubts and regrets as we journey through this season, I think we all understand that this is where we need to be. To be honest, getting to the level we need to be at in the next couple of seasons isn’t the hard part, sustaining that level of talent and commitment is where the real challenges lie as future seasons unfold.”

Though the team may not fare as well this season as they did in seasons prior facing easier opponents, in order to get to where they ultimately want to be, the team must sustain the high level of skill and commitment that they have now in its future seasons. Be sure to come see the Big Red in action at the Lou & Gibb Ice Arena in Newark and stay up to date with the latest news and scores on Instagram (@denisonhockey), Twitter (@denison_hockey) and online at denisonhockey.com